Who do you think will make up the ATP top 5 in 2025? Here, we make a few guesses. We’ll be back in 2025 to see how we did! Plus, stay tuned for our WTA predictions in an upcoming blog post.

The tennis world is gushing over 18-year-old Canadian “FAA.” Felix currently ranks 21st in the world, and is the youngest player in the ATP top 200. Impressive performances in the past few months have rocketed him from junior fame to tennis stardom. He is the youngest person ever to qualify for an ATP Challenger main draw, and furthermore the first person born in the 2000s to have an ATP ranking. He won the 2016 US Open junior title at only 15 years of age, and has shot up the world rankings in impressive style. Lighting-fast movement, extraordinary focus, and mental strength leaves Felix a force to be reckoned with today, let alone six years from now.

Stefanos is 20 years old and ranked sixth in the world. With wins against each of the big three, Tsitsipas is more than impressive for his age— and for any age, for that matter. An aggressive baseliner with fast movement and an all-court game, he retains complete composure on court. However, there is one catch: Stefanos has a 0–5 record against Felix Auger-Aliassime, and will have to figure out how to beat the young Canuck if he wants to reach the top of the tennis world. 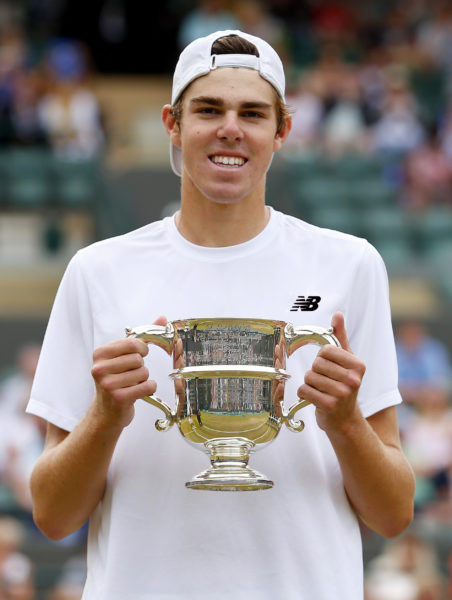 As the tallest player on tour at just a sliver under seven feet tall, Reilly has the opportunity to capitalize on the path other big players such as John Isner, Kevin Anderson, and Milos Raonic have carved into the tennis world. With crazy fast serves, wicked forehands, and bombs for backhands, Opelka is all about power. The formula has shown success even at his young age; the former Junior Wimbledon Champion recently captured the 2019 New York Open title. Opelka is a major threat on both grass and hard courts. I don’t know about you, but I wouldn’t want to meet him on the other side of the net (unless it was just for fun, as he is a lovely person in real life).

Another Canadian? What’s in that northern water? Shapovalov held the honor of being the youngest person in the ATP top 100 for a long time, before fellow countryman FAA came tearing through the charts. Armed with an aggressive game and engaging personality, Denis beat Rafael Nadal on his way to becoming the youngest player ever to reach an ATP Masters 1000 semifinal at 17. He immediately followed that up with a run to the fourth round at the US Open. Currently world No. 27, Denis is a top contender to be in the Top 5 six short years from now.

The prince of clay is set to take the throne once the king has stepped down. At only 25 years old, Thiem is ranked fourth in the world. Clearly, the big three have shown that impressive tennis can come easy at 31 years old. Few young players have shown as impressive promise on the dirt as Dominic has, and unless someone steps up, he can expect to be taking big hauls of points away from the clay-court season year in and year out.

Novak Djokovic: A fitness fanatic with effortless movement and an easy-on-the-body playing style. Djokovic could easily still be wowing the tennis world in 2025 if he manages to avoid any serious injuries.
Karen Khachanov: Top 10 in the world? Check. 23 years old? Check. He’s already here; he just needs one big result to really stamp his name in the tennis world. There’s big potential in this big Russian.
Alexander Zverev: The ATP 1000 specialist, Zverev continues to struggle in Grand Slams. If he can reverse this alarming trend, Zverev can be in the ATP top 5 in 2025.
Hubert Hurkacz: At 22 years of age, the big tall Polish man has been rocketing up the rankings with impressive wins over big names. Since he can play well on any surface, a breakout performance looks imminent for this young star.
Borna Coric: A defensive baseliner with a killer backhand. If Coric can get his forehand firing, he will be an intimidating opponent on tour in six years’ time, and possibly reach the top 5.

Roger Federer: I mean, why not? Will he stop? Is he human? Who knows.
Frances Tiafoe: By 2025, Tiafoe will be 26 years old and crazy athletic with an extreme love for the game. If the stars align, Tiafoe has what it takes to make it big on the ATP Tour six years from now.
Daniil Medvedev: in 2025, Medvedev, deemed “The Crazy Russian,” will be 29 years old. He’s a constant threat from the baseline with a wacky forehand and a solid backhand. With a little work on his movement, Medvedev could be a possible top 5 star of the future.
Alex de Minaur: At the age of 26, de Minaur will be at his peak playing ability in 2025. Lighting-fast with great instincts, Alex shows great potential for growth in the sport.
Nick Kyrgios: Talent pours from the young Aussie. But his flaws are well-documented and often self-destructive. Can he be tamed in six years’ time? This is one wild stallion of a dark horse.